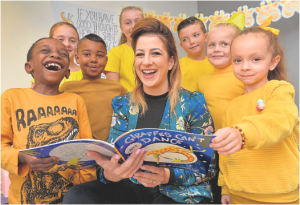 Thursday 10th of October marked Mental Health Day and Berrybrook Primary School were delighted to open their new well-being room in conjunction with this celebration. This unique room acts as an oasis of calm for children in school who may feel overwhelmed by any issues outside and inside of school. Inside the room are sensory toys, lego and comfy seating to help them unwind when things get a bit too much for them. This new space is there to be used by the children whenever they need some time out for themselves.

Previously when children became distressed or  anxious in lessons, they would leave the classroom and stand in the corridor.

This new room was officially opened by Megan Reece, who found fame on the television show—The Voice in 2016. Megan, mother of five children said,

“When I was asked by the school to open the room I immediately said yes as mental health is very close to my heart.

It’s reassuring as a parent for me to see that schools like this are taking the children’s health into consideration and thinking about their futures in terms of health as well as education.

The well-being room shows the children that they’re supported and that help is there for them when they need it, which is something they can take with them into later life. I know I’d have loved something like this”.

Megan performed two songs for the children ‘Ride Up’ by Andrda Day and ‘Empire State of Mind’ by Alicia Keys which were chosen to reflect the topic of the day.